The catalyst for TripleWin is General Motors’ Saturn Corporation. General Motors (GM) formed Saturn in the mid-1980’s to bring about major changes in how their vehicles were designed, built, and sold. To create a platform to make tough, but necessary changes, GM set up the Saturn Corporation as a wholly-owned subsidiary and located its manufacturing facility 600 miles away from Detroit in rural Spring Hill, Tennessee.

From the beginning, Saturn operated by a set of values and philosophy of win-win. This win-win approach was implemented in many facets of the operations – e.g. union-management relationships, leader-to-team member interactions, customers-to-retailer transactions, and in retailer-to-company relationships – the spirit of win-win was one of Saturn’s strategic advantages. The strongest results at Saturn came in the innovative approach Saturn used with its customers (People First) and in the strength of the Saturn value-based organizational culture. Saturn changed peoples’ lives and created a successful new approach to producing and selling automobiles. General Motors made the tough decision to eliminate the Saturn brand and operations as part of their reorganization and downsizing strategies. With the elimination of the Saturn brand, many of the customer practices were integrated into General Motors’ retailer processes.

In 1991, former Saturn President, Richard G. (Skip) LeFauve created a consulting team (Saturn Consulting Services) to respond to hundreds of requests to learn from the Saturn approach. The team of consultants delivered speeches, tours, training, and consulting services all over the world, using effective experiential learning approaches and the Saturn values and philosophy as their platform. The team was disbanded in 2000 and the training and consulting resources were redeployed to share the Saturn methodology in other parts of GM.

The products and services sold by Saturn Consulting Services (SCS) built on the Saturn values of Commitment to Customer Enthusiasm, Teamwork, Trust and Respect for the Individual, and Continuous Improvement. In 2002, TripleWin Consulting purchased the rights to the SCS programs. Since that time, new courses and services have been added to the original Saturn training programs to meet customer needs. The original spirit of Saturn can be found in every TripleWin program or service.

The Bridge and Saturn – the story.

In 1997, DOOR Training International and Saturn Consulting Services formed an exclusive partnership to sell and deliver Saturn training programs in Europe and Australia. The initial goal of the program was to change the culture in the automotive retail environment from an adversarial to a collaborative approach. This had never been attempted before. These programs included the Opel Difference, the Vauxhall Way, the SAAB Way, and the Holden Difference.

DOOR facilitators were trained and certified by Saturn Consulting Services (SCS) until 2000. In 2002, Guus Oosterop and several other former DOOR trainers formed TripleWin in the Netherlands. They invited other colleagues join in, and TripleWin Global was created. The initial members that remain are: Guus Oosterop (The Netherlands), Nancy Brown-Johnston (USA), Tormod Andreassen (Norway) and Martin Krüger (Sweden). The TripleWin Global Network is a living, expanding organization and continues to evolve. TripleWin Finland joined in 2009 and TripleWin Australia joined in 2014.

TripleWin products and services expanded over the years to meet a more general goal of generating a triple win: a win for the customer, a win for the organization, and a win for the individual team members. Based on the experiences of the TripleWin Global Network members, the primary business areas of TripleWin evolved to include:

All members of the TripleWin Global Network are recruited based on a shared value system and business approach and are committed to live and work in alignment with the five TripleWin Values. 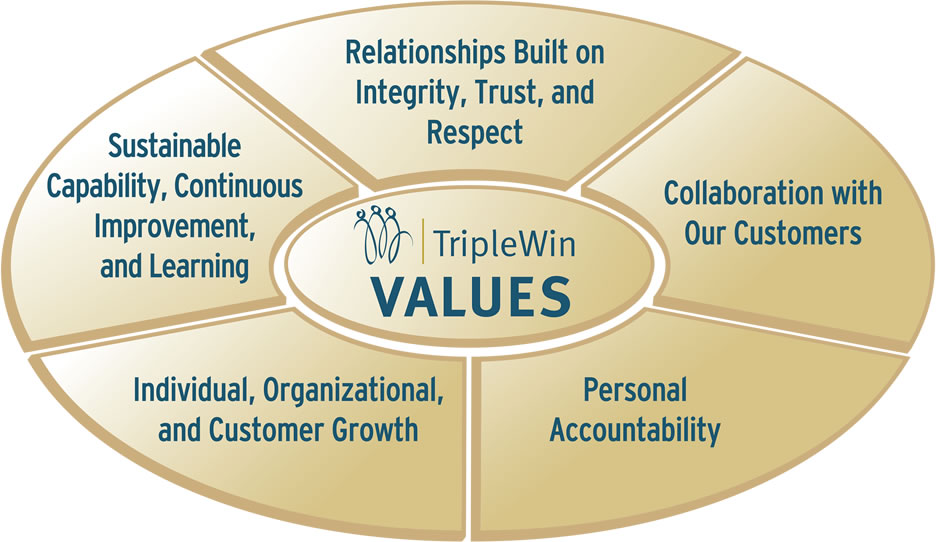